Piece of propaganda or political trollfic? YOU DECIDE.

Note: After I wrote this post, I made the decision to insert a bunch of gifs with hot men in them. It’s not for you – it’s for me. To preserve my soul.

So here are some essential facts about “Sucking Strelkov”:

– It’s all downhill from the moment you read that great title!

– And it’s almost as if this story, which is 5,7k words long, was written specifically for a journalist to discover it and start shrieking about it on the internet. Immediately, from…

Last time we left Alice, she discovered first part of her memories. You can also start from beginning.

But sometimez sheer affection won’t get you anywhere.

Tiska himself is not particularly helpful either, too.

Of course I am!

Then maybe you might consider this little incident a good thing. The Clock hands will forcibly show your past. So long as you’re prepared… I leave it all to you.

It’s a charm for wardens. I hope it can protect you instead of me, Alice.

If you eat it during battle, you will regenerate your stats fully when defeated. Well, looks useful for boss battles and the like. More talk brings you only this:

No need to rush. It’s totally fine if you take this at your own pace.

Okay, Alice, I know you like to talk with Tiska, but enough of lollygagging. Onwards to second door!

Departure for Malis – The Cradle of Slavery

ghts Seen – Some guy made from water. Relatively fast. It can heal itself, but uses this skill rarely.

Tactics: Likes to cast Guard first, Stardust second. Obviously, counter-cast Guard in this case. Beside that, just Brain Blue him to death once.

avant – strange name for something that looks pretty much like zombie. It is slow.

Tactics: Guess what two skills you have to use. If you guessed Guard and Brain Blue, congratulations! No prize, though.

dge – as it is flying sword with mean attitude, name is certainly appropriate.

Tactics: It has only offensive skills, so you can start beating him up right away. You have to Guard once anyway, as Brain Blue will take care of him.

Death Maria – severed head of Medusa… ISIS got into Cisthene or what? It is strongest regular monster here – it is capable of surviving Brain Blue. If this happens, time to incerase PSY.

Tactics: It always guards first. Kick her with Shock, on second turn guard, then wipe her out with Brain Blue.

nease – Big green rattlesnake. It is pretty fast, if he starts first, time to improve AGL.

Tactics: Guard, Brain Blue. You may start to think that combat system in this game is somewhat… lacking.

Basically, you would want to use anything else than Guard+Brain Blue combo only for new skills. Also try from time to time aliment-inflicting moves and the like.

Let’s get back to business. First walk to west. You will notice bonus cog next to water tower.

Shadeling loitering next to couple has nothing interesting to say.

To Malis, I guess. We will go too. Ask shadeling in entrance.

Huh? Why train moves, yet humans are still frozen? And that view in window… seems like this place is partially in timestream. Is this guardian doing, I wonder. Somehow I doubt this train will ever reach it’s destination, if you do nothing.

If you wanna go back to the Land of Time, jump out that door there.

You can only go west.

This looks like sleeping car. Local shadeling is visibly distressed.

This place is uncomfortable somehow…

Green cog here is randomly guarded. Drop is random too, for example:

Go west to next car.

It is just me or this whole train is almost empty? Shadeling by window wonders:

If we keep steaming on like a train, can we be freed from this living hell?

Near west end of car is partially obscured green cog. It is still relatively easy to spot, because it moves. Like previous one, is randomly guarded and drops randomly. Example:

Next car has blue cog. Shadeling here has this unsettling warning:

Humans have these relationships where the low ones support the high. I guess that’s what’s goin’ on with the car next to this one.

You will not be back

Okay, time to take on blue cog. What Time Scar guards it? 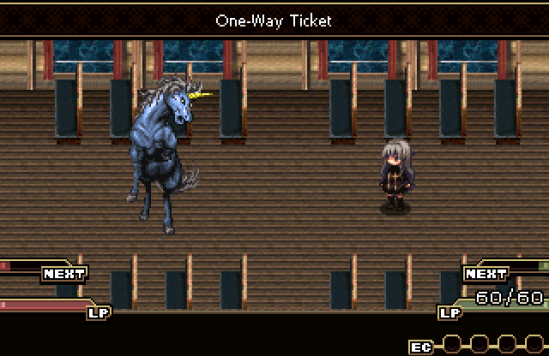 Tactics: First do guard, but if it guards, guard again. You will need two Guard+Brain Blues combos. Counterattack thanks to Troll Fang may shorten this battle significantly.

After defeating it don’t forget to return to Land of Time and do some gardening’n’shopping. You may also trade this (provided you already found it):

I hear some moves you have to learn from an enemy usin’n them on you.

“Time” to make some memories! Free-for-all ’till the Great Clock is fixed!!

Oh, you think you are so clever with this pun, huh. Time to back to Land of Living. Let’s see what is ominous fifth car all about. Go west.

Huh. Prison car. In hindsight, I should have seen this coming. Sadly, all prison cells are locked. We will deal with them later. Resident shadeling cynically notes:

With rooms this small, guess you can get a lot on.

As you cannot do anything here for now, go west.

You can’t Invert flying foes, nor Blind eyeless ones. You can usually tell what effects won’t work from a foe’s appearance.

Next car is normal. Still empty, though. Well, not counting shadelings and green cog.

Watch out for the Concentration move. It sacrifices LP for EC. You better fear it. ‘Cause an enemy can get ready to unleash a finisher quick.

It better be, because so far game is pretty easy. Ooh, next part of lore!

First, God made a little garden called the Land of Life. Then God put life in it. When changes in time occured, it made contradictions in the garden. So Order was born to correct things’ paths when they went astray. ‘Course we’re stuck without much freedom now thanks to that…

Funnily enough, this particular optional green cog is not optional at all. At least, not if you want to progress in game. I see what creator did here. Again, random guard, random drop. Like this: 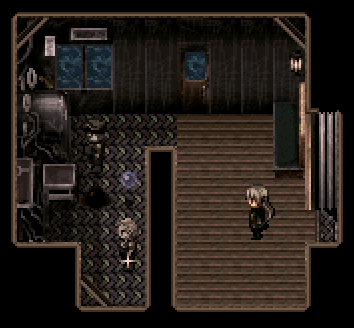 I’m the one moving the train. Impressive, huh?

Yeah, sure you are. Move on. That fat guy below blue cog has Jail Keys. Take them and return back to prison cars in reverse order. In car closer to train head, in cells are two points of interest: green cog and red shadeling. With green cog you know the drill. Random monster, random prize, but this time it is common item, not accessory. Red shadeling is different matter. Should you agree to his challenge, you will meet with…

As prize for defeating him Mr. Shadeling gives you this new skill:

In other prison car, you find shadeling in one of cells.

Ack! You found me!! Take this and leave me be!

He will give you random common item. Ask him again.

Leave me beee… I wanna know how it feels for the people put in here.

I think it involves fear not exactly about being closed here, but about what happens later. Anyway, lets tacke last blue cog here. As usual, One-Way Ticket is here. Kick it’s ass and return to car where you started. Do your chores (you know, allocating force, harvesting plants, selecting skills etc), make sure you have Southern Cross and return back.

And yet when I close my eyes, her smiling face comes to mind. This is a nightmare… right?

Preparations: Grim Reaper is extremely strong. This sudden spike in diffculty can be irritiating, not to mention it shows more clearly how unbalanced is this game.

You will need significant amount of PSY to take Reaper down in practical amount of time. And you have to kill him fast, because he will kill you sooner or latter. As Skills select Guard, Brain Blue, Southern Cross, 2xPleasure Fruit/Joy Flower. As accessory you probably will want Coral Hairpin.

Tactics: You should start first with Southern Cross. Now you will have to fire Crosses as much as you can, taking in account your health. You have to survive not only Cross (20 LP is significant amount of your health), but also enemy attack. If you see Reaper guarding, either Guard or heal yourself. Finish Reaper with Brain Blue.

You will probably get your ass kicked. In this case you will wake up at Great Clock.

Alice, are you okay…?

If you are too weak to take on Grim Reaper, you will have to grind. Blergh. At least, if you get hurt and Tiska heals you, he has new advice.

Are you getting any new skills? If you want better skills, try using the old ones more.

We know that already, but thanks anyway, Tiska! 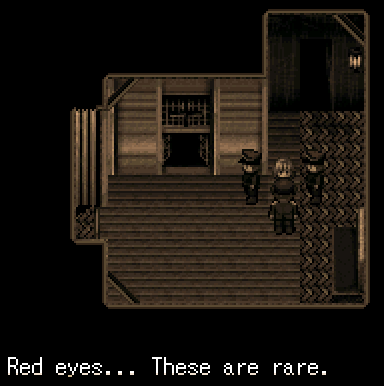 Rich guy in Malis has a thing for these. No doubt he’ll want her.

Guard lead Chronola to her cell. One moment later…

…Oh, there is! Good… When they took me here, I was the only one…

…You know where this train’s going?

Well, I heard one of those men talking about the “Cradle” in Malis. Cradle… Hey, you know what it really means?

End of flashback. You are in last car. Enter cell and take fragment of clock hand.

You are back in Land of Time. This is getting darker and darker, isn’t it? See you next time.

I think there is time for sousvelliance package. Inspiration for this post should be obvious.

Google Glass or equivalent, internet connection, streaming live, copying on fly to network of p2p servers all around world to make it impossible to delete or censor it. Destroying recording device would not help in this case. Specialistic websites dedicated to cover live certain events (like protests) could be set up, all options including choosing particular person to follow.

It already can be done, it is just expensive (Google Glass goes for 1500$). But prices of gadgets fall, and open source software is for free… everyone will be able to transmit everything, if price of thing like Google Glass will be 15$. And it will, it is just matter of time.

What will be response of law enforcement? They cannot ban these devices (at least in USA) or arrest everyone, right? Right?

I can’t wait for police cellphone jammers, as they will be inevitably deployed into use of USA, China, Russia and other pseudodemocratic and authorianian countries. Of course, it will be to prevent terrorist communication or something. Not for preventing transmission of evidence about police brutality, nooo sir, not at all.